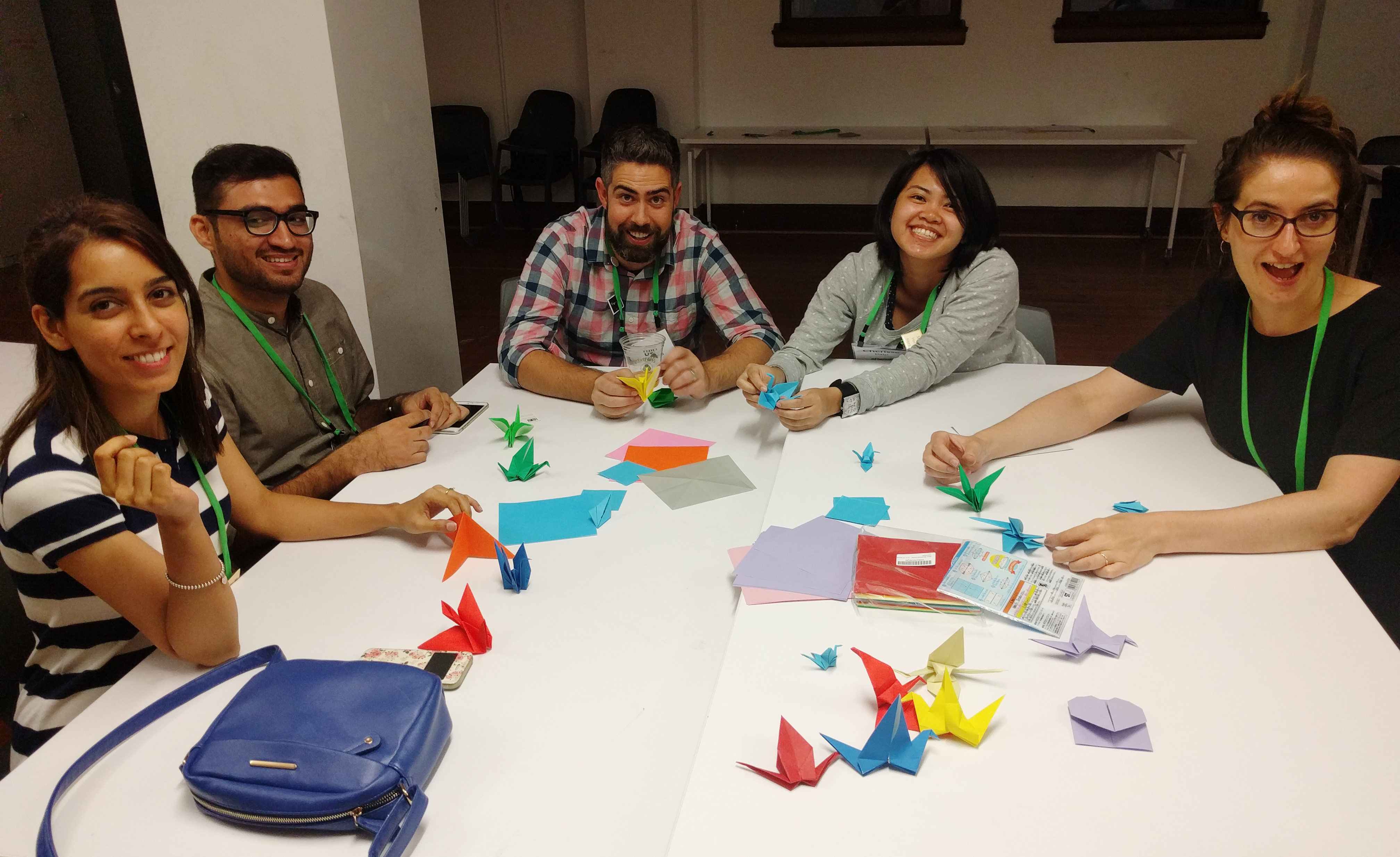 A group showing off their origami at a SRCCON Hobby Workshop.

Evenings at conferences can be tough. After spending a day attending keynotes and panels, the people you were hoping to run into are suddenly nowhere to be found. You heard something about a sponsor’s party at a restaurant near the Hyatt–or was it the Hilton–and there are those folks from the panel earlier who invited you to dinner. Maybe you’ll just go back to your room and probably folks will end up at the hotel bar at some point, which isn’t the best because you don’t drink, but you will see people so I guess so.

We’ve all been there. So in designing SRCCON, we include evening activities open to all participants. And more than just giving people something to do, we think about how our Thursday night activities contribute to the entire arc of SRCCON. A hands-on conference like SRCCON is intense, and we ask all participants to bring their whole selves to the event—and so, after a day of intense sessions, it’s important to let participants share the non-work side of themselves with the community, and to focus on the “life” side of the work/life balance.

Our first SRCCON had four rooms in the evening, one for tabletop games, one for lightning talks, one for hacking, and a “foodie” room for exchanging homemade eats (which turned into a beer exchange–more on that in a second). This year, our third, we greatly expanded the options for the evening and ended up keeping the vast majority of our 300 participants engaged. Here’s what we did and how it worked.

The key to keeping people engaged in the evening is understanding that not everyone wants to spend their nights the same way. That’s why just having a bar available, or a huge room for lightning talks, or throwing a party doesn’t work. Some people want to chill, others want to chat, and many need some kind of intermediary to engage with new people or try new things. So for SRCCON evenings, we offered a lot of varied activities, none of which required attendees to stick with a single thing all night. You could jump from one thing to the next, or go out and come back. We had a clear schedule with times and locations listed for everything, and we made sure it happened on time. Here’s what we offered:

What this all meant was that at any time on Thursday evening, there were about eight different things to choose from. This was a dramatic increase from previous years pushed by both attendance numbers (more than double year one), but also by feedback we solicit and build from every year.

Offering this much programming in the evening is a fine balance between event design and user-driven ideas. In addition to soliciting ideas for Hobby Workshops and Conversations, much of what was on offer came through suggestions or ideas from SRCCON attendees a few weeks in advance. We have an etherpad [link] that people listed games they were going to bring for the game room, the attendees that organized the lightning talks could put a link to their own submission form, and other people could list ideas for the evening (or at other points in the two days of SRCCON).

So, how expensive is it to run a full slate of activities in the evening? Not extraordinarily so. The space rental covered us until 10pm, so as long as we got everyone out by 9:30 or so (so we had time to reset the rooms), we were good there. We believe in feeding people well at SRCCON, so dinner was always going to happen and was by and large the biggest expense but was wrapped into our overall catering cost. Ice Cream was next, running about $1000 to cover everyone in attendance (we ended up giving away about 350 scoops). Our craft sessions were each given a $100 budget, but we ended up only spending about $150 total across the sessions. Oh, and we bought at $30 Chromecast to stream the DNC (which actually could never get on the WiFi so someone donated their laptop).

We heard from attendees was that they had partners coming to Portland with them, and that they wanted to include them in some way, if possible. Because SRCCON ticketing is in such demand, we couldn’t simply give partners access to the full slate of SRCCON, but we did make a partner ticket (sold at cost) available for the evening activities. These tickets gave partners full access to our dinner and all activities in the evening (even the free ice cream). We had about 10 people take us up on it, and every partner attended for at least some of the evening.

We know that most conferences put a real focus on drinking at night. Every year at SRCCON we’ve been reducing that focus. Year one we offered an open bar with beer and wine, but we also had a “foodie” room that got a little more beer-soaked than we would have hoped. Year two, we gave every attendee two drink tokens (and cut out the beer exchange). This year, we only offered one. And you know what? It was fine. Folks that wanted more bought another beer. Folks that wanted something else, their token was good for that too. (And our tokens were custom-printed wood, so they made a nice souvenir for folks who just kept them.)

In addition, from previous' years feedback, we made sure that we had a nearby Alcoholics Anonymous meeting location listed on our website alongside a description of Thursday night activities, so that that was an option for anyone that needed a meeting. That involved looking up the meeting and double-checking via phone to make sure theonline meeting information was up-to-date and accurate.

The safety of participants in SRCCON is something we take very seriously. Our Code of Conduct, and the internal enforcement plan we have for it, doesn’t just apply to the conference day, but the night as well. That means that we expect our participants to abide by the Code during our Thursday evening activities as well as whatever they get up to after the building closed (10pm). We kept shifts on our shared phone number for our help line to ensure that if there was a problem late, someone would be able to field it. Thankfully, we didn’t have any issues reported, but we were ready if we did.

When we plan SRCCON, we think through the full two days of the conference. Our Thursday night activities–almost all kept light and fun–are a key part of that approach. We know that not every conference can afford it, or that some venues require everyone to stick to a normal 9-5 schedule, but thinking about the whole of the conference experience, from the beginning to the very end, and all points in between, makes a real difference in the way the entire event feels and runs.